On May 1st, members of the Revolutionary Workers Union, supported by other Socialist Republican Organisations, took control of a long-term vacant building in Dublin City Centre and opened it to provide housing for those in need. This Revolutionary Housing Action, the first major direct action since the ending of the covid-19 pandemic, was carried out after the Revolutionary Workers Union Council passed an acquisition order on the building at 12-14 Eden Quay, previously known as Lefroy House, a youth hostel that was closed in early 2021 and left vacant, which the RWU has now renamed James Connolly House in honour of the great Socialist Republican leader executed by British Imperialism in 1916.

The building, which was previously administered by the Salvation Army, was gifted to them on a long lease, provided it was never closed so long as homelessness remains an issue in Ireland. The Salvation Army and the Free State broke this commitment in 2021, closing the building at a time when homelessness is rising across Ireland, and there are people dying on our streets. At the time of writing homelessness in the Free State is at 10,000 People.
The RWU have now restored the building to its intended purpose, providing housing to those in need and also working to alleviate some of the other horrors of homelessness, through the building of mobile sleeping pods and the provision of food and hot drinks to the Homeless of the City Centre on a regular basis.

But the programme of the RWU and James Connolly House is clearly not charity. The ongoing acquisition of the building is clearly political in nature and is explicitly Socialist Republican in both practice and ethos. The building has become a revolutionary canvas on which Revolutionary banners and flags now proudly fly, most prominently the Starry Plough of the Irish Citizen Army. The RWU and James Connolly House are asserting that the Housing and Homelessness crisis are no accident but are in fact a deliberate policy of the Free State designed to enrich private landlords and the imperialist vultures that control the housing market, through the exploitation of tenants. The acquisition of a prominent city centre building by Socialist Republicans now for a month, in order to highlight the housing and homelessness crisis has demonstrated clearly, that Socialist Republicanism has the interests of the Irish Working class at the core of its programme.

The hundreds of people who have attended political rallies, public meetings, Commemorative events, reading groups, music sessions or volunteered to help at James Connolly House also demonstrate that Revolutionary Housing Activism and Socialist Republicanism have a high level of support in Dublin. Far from being a fringe movement, the action has brought the revolutionary support base out onto the streets and into the direct struggle against landlordism and housing vultures.

The support demonstrated has been so strong, that on May 17, the Revolutionary Workers Union Council announced the acquisition of a second long term vacant building in Dublin which has been renamed Liam Mellows House after the great Socialist Republican executed by the Free State in 1922, which is already providing much needed housing for a number of people in need. In naming the new acquisition Liam Mellows House, the RWU is clearly demonstrating the Socialist Republican nature of their activism and is placing the People’s Republic Proclaimed in 1916, established in 1919 as the direct counter point to the ongoing free state counter revolution that began 100 years ago and continues to violently suppress the Republic.

Now with two liberated buildings in Dublin, housing people in need, the RWU has demonstrated that this campaign is different to the other housing agitation of recent years. While other housing agitations have merely talked or focused on begging the committee for the rich at Leinster House for crumbs, the RWU has taken action. Far from vague calls for more housing, the RWU has made clear that there is already enough housing in the country for all, it just needs to be taken out of the hands of landlords and housing vultures and given to the people. The Revolutionary message of the campaign is to take back all empty homes, whether they are boarded up or marketed as air bnb’s and to open all empty homes in Ireland to house those in need.

The action is also different as unlike others in the past, James Connolly House has defied a free state court order to leave the building and have continued to build on its programme. Far from being a stunt, the Revolutionary acquisition of James Connolly House has already outlasted the Apollo House project of 2016, a projected that ended in the acceptance of a Free state injunction. Further, Liam Mellows House has been providing a refuge for its residents for 14 days. Through action, the RWU has once again asserted that it is Socialist Republicanism that is the Revolutionary Movement and the guiding revolutionary thought in Ireland.

Anti Imperialist Action is fully supportive of the actions of the Revolutionary Workers Union, James Connolly House and Liam Mellows House. We proudly recognise them as a part of the wider Revolutionary Socialist Republican Movement in Ireland. Like the RWU we believe that now is the time to build a militant, all Ireland working class led housing movement to fight and defeat landlordism and housing vultures and to deliver Housing for the People. These revolutionary acquisitions of empty building by Socialist Republican Activists have demonstrated that it is possible for the working class to get organised and find solutions to the issues facing us ourselves. It has demonstrated that the fight against the artificial housing and homelessness crisis is a key part of the fight for National Liberation and Socialist Revolution in Ireland. These fights are interlinked and must be fought together. The Housing Resistance is building. It needs to become a Revolution. 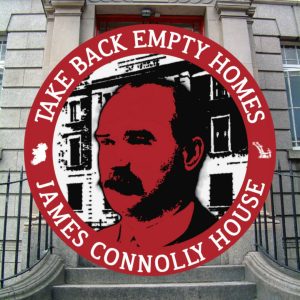 Now is the time to take up the call of the RWU and the Housing for the People Campaign, to take back all empty homes and to open all empty buildings to house those in need. While this campaign has begun with great strength in Dublin, it is now time to see empty homes and vacant buildings being opened by housing activists across the 32 counties. However it may be for others, Anti Imperialist Action is ready and willing to play our part in building such a movement to deliver Housing for the People and National Liberation and Socialist Revolution.

An All-Ireland Socialist Republican mass-organisation building people’s resistance to British, EU and US imperialism in Ireland as part of the world socialist revolution.

Applying the best traditions of Republicanism in Ireland and the international communist movement.

If you want to help overturn the rotten oppressive and exploitative systems in Ireland.

Get in touch via social media or email, or come to our demos, actions or events.
As an All-Ireland organisation, you may have cells or supporters in your area.